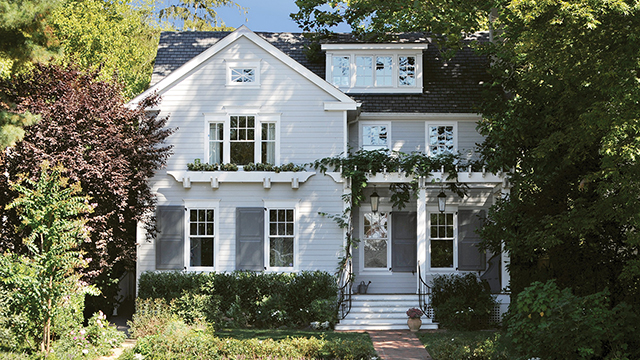 “Your house is on fire”—five words no one ever wants to hear. I hurriedly hung up the phone. My wife and I rushed from work and were met by a blockade of 10 fire trucks, crowds of wordless neighbors, dauntless firefighters, and snaking hoses that choked a chemically jaundiced lawn. Luckily, no one was home, and the flames were extinguished by the time we arrived.

The water that saved the structure had saturated the first floor and caused its own damage. Walls were stained by smoke, intense heat melted a ceiling light onto a bed, and soot and an intense sulfuric odor had contaminated almost everything. We learned that a handheld shoe-shine machine had toggled on and in 15 minutes caused our home’s utter destruction. As an architect, husband and father, I was burdened with the realization that my family and I had lost our home and everything it stood for. I embraced my devastated wife and promised her that I would transform our home from its tragic state into an opportunity for growth, which guided the design and rebuild.

A little more than decade earlier, I had renovated the original 1940s home on a tight budget. Financial limitations had constrained the design and, throughout the years, my family and I had grown and our needs for the space had changed accordingly. The post-fire renovation, while distressing in its necessity, was an occasion for the dreams of our home to be realized and to more fittingly suit our maturing family. The major goals for the renovation were to revitalize the entry procession, create more storage areas, add space and light throughout the interior, and to encourage family spaces.

A three-story addition was added to the north front corner of the house, which added storage in both the basement and attic to compensate for the property’s lack of a garage. The first- and second-floor expansions corrected the earlier nonexistent entryway and crowded master bedroom, respectively. A new front trellis porch—constructed for flowering wisteria vines—was designed to lead to a restructured entryway that opens to a new, generous front foyer. The new front door and foyer combination provided a marked improvement from the pre-fire floor plan, where stairs immediately met the edge of the front door.

In the basement, additional closets were added. Up the stairs from the basement to the first floor, a larger mudroom could now store a bike and our family’s supply of coats and shoes. The family room was also expanded and served as another improvement. New stylistic statement pieces in the home—such as an 18th century Gothic crib-turned-fireplace screen—were complemented by furniture that had survived the fire, including a feeding trough and newly upholstered twin armchairs. The items were kept as reminders of our home’s story.

The second floor received a new foyer, which allowed natural light to flood in up the stairway to the third floor. Light was also prioritized in the master bedroom expansion, as two window groupings and a set of French doors opened the room. At the foot of the doors, a custom, comfortable daybed was added—ideal for late Saturday morning lounging, a temporary sickbed or an alcove for our dog to nap. Since almost none of the second-floor walls survived the fire, the remaining bedrooms were reframed to afford these spaces larger closets. In one of the bedrooms underneath the stairway to the third floor—in a much-loved creative use of space—a “Harry Potter” walk-in closet for our then-7-year-old daughter was included in the design, complete with an antique window.

The third floor was imagined as a new, flexible family work-lounge space with multiple desk surfaces. The addition of a bathroom with a compact shower encouraged the multipurpose nature of the floor, easily transitioning itself from a guest room to a quiet haven for homework.

Once completed, the rebuilding of our home mirrored our family’s perseverance. The fire had brought hardship but had also made possible moments of profound kindness from others and provoked resilience within us. The renovation allowed the home to assume a nuanced sophistication characteristic of success weathered by trial. QR

Donald Lococo Architects was recently ranked as one of the top three residential architects in the Washington, D.C., metro area. This has been made possible by Donald’s personalized process, which is informed by pragmatics, budget constraints and client sensibilities. This personalized process not only creates homeowners who consistently find their new homes and renovations thoroughly considered, but it has also provided the firm with an uncommon proportion of awarded and published work, as well as the rare distinction mentioned above.

Focusing exclusively on single-family homes and additions, Donald’s practice remains well-versed in all architectural styles and historic periods. His dexterity also allows clients to move toward modern or traditional preferences and let their home develop freely during the design process.

Donald grew up in the arts studying painting and channeled toward a career in piano. He recalls, “The day I changed from a classical pianist to architecture, it seemed as if I would need to start from scratch.” Today, he sees it as a great advantage in his practice and realizes why architecture is often described as frozen music.