Whole House Remodel: The Art of the Scrape 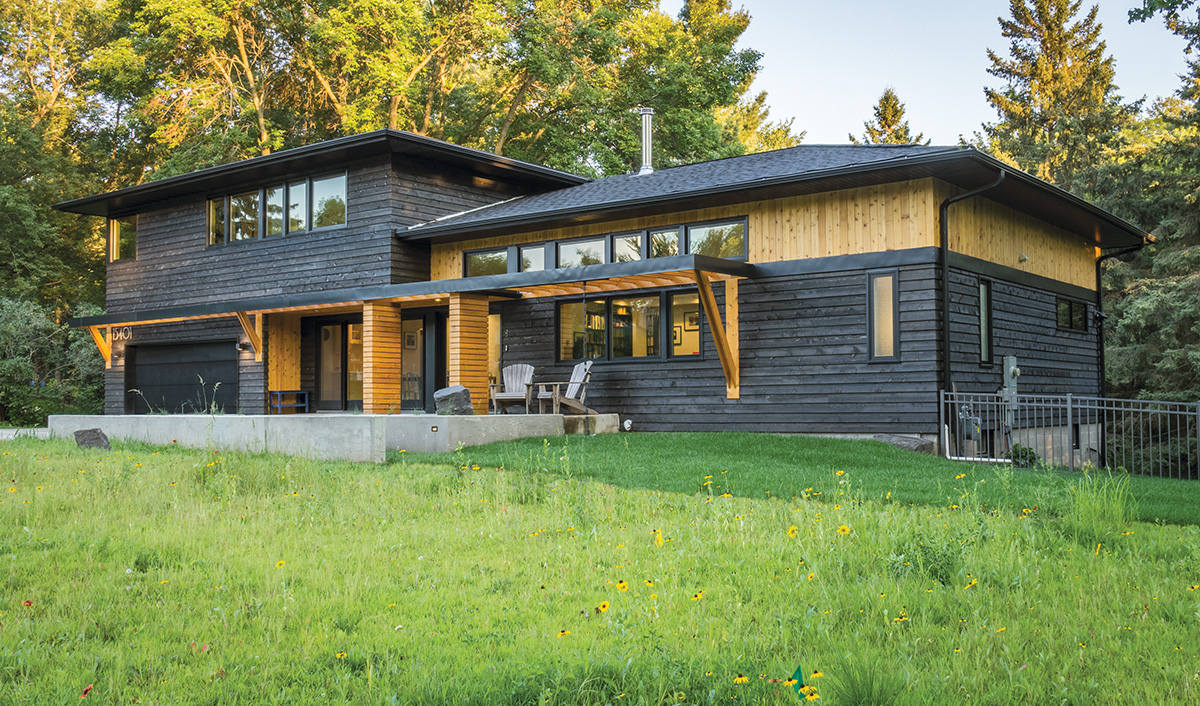 A busy family of six had outgrown its 1,762-square-foot rambler built in 1969. The four children were getting bigger and required their own spaces. The parents too sought more space—an upgraded office and a master suite, complete with a sauna. And family spaces—the kitchen, great room and dining areas—needed to work together better. In short, it’s the making of thousands of remodeling stories each year: how best to accommodate a growing family.

Sid Levin, an architect and remodeler who founded Revolution Design + Build in 2008, says the original plan was to remodel the home in phases; but as discussions with their client progressed, it became clear that a “scrape” and re-do was in order.

A scrape, in this sense, meant the house was substantially demolished, down to the subfloors. Exterior walls stayed in place, but many interior walls were removed to make way for others. A new “Scandanavian, less-is-more” plan took shape, one that fit within the exact same footprint, but with a new second floor to house four secondary bedrooms and a first-floor master suite.

“The proportion of the house was really still perfect for the kind of a house they wanted to live in, which is that open floor plan that people desire; but for the most part, the house’s foundation was well-suited to what we were after. The inside of the house, we thought about efficiencies and dual-purposes and being efficient with every square inch that was added,” Levin explains. “They were also extremely green conscious. They wanted not just the best insulation and very high quality furnace and air conditioning systems, but they wanted triple-paned windows. So this project was an exercise in being efficient in every possible way, and yet the house does not feel cramped at all.”

Scraping the house gave rise to higher ceilings on the main floor. Where once 9- and 10-foot ceilings loomed, 12-foot ceilings improved the space at the gut level. And yes, higher ceilings offer a more open feeling. But they also offered the opportunity for more daylight. That’s because Levin and the team from Revolution specified a series of clerestory windows, which allow light into the main floor from almost every direction.

For example, a set of windows on the new front elevation—just right of the main entry—are south facing, allowing maximum daylight during cold winter months. In fact, those very windows are positioned just above the new office, which has no ceiling but is nonetheless surrounded by 8-foot walls. Windows fill the gap above the office and, from a design standpoint, add immensely to the modern, Scandinavian style desired by the clients.

“When you enter the house and you realize that the office space—the quiet, piano room and space-to-get-away—doesn’t have a ceiling on it, allowing the piano sounds to come across to the other side of the house, you understand how it makes all members of the house feel together,” Levin says. “You can have privacy, and you can have quiet time. So that has great value to our clients. And it allows the light to flow right over the top of the office into the family and kitchen spaces, so that whole area casts a mesmerizing feel over the entire living plan.”

Spray-foam insulated walls and R-70 ceilings are complemented by a Morso high-efficiency, wood-burning stove. Made in Denmark, the stove can max out at 35,000 Btu. Behind it is the open- ceiling office /piano room, which is audibly connected to the family spaces on the ground level.[/caption]

It should be noted that each section of clerestory windows is in fact a series of irregular sized windows that form a single light source. The purpose, Levin explains, is to subtly signal that the space on the inside is indeed one large space, when in fact it is not. It is several smaller spaces that are unified. All of it is made possible by the decision to move from 9- to 12-foot ceilings on the main floor.

Four bedrooms and a ‘megabath’

The new second floor occupies half of the home’s footprint. It is accessible via a set of stairs tucked neatly between the dining room and kitchen. Upstairs are four bedrooms, one for each child. The total square footage is slightly more than 1,000 square feet.

The solution for how to fit everything into the space required some creativity involving the bathroom spaces. Two secondary bathrooms (toilet and bath/shower in each) are married by a large double-bowled lavatory room in the middle. It is a twist on what is known as a Jack-and-Jill bath, where two bedrooms share a full bath. This is a new kind of creation that Levin calls a “megabath”—a very efficient solution, where efficiency is required. And yet the second floor does not feel cramped. It even has a small sitting area adjoining the second-floor landing.

The efficiency upstairs, Levin notes, is designed to keep the family together on the main floor when not showering, studying or sleeping. And smack in the center of the main floor is a high-efficiency wood-burning fireplace which, when combined with the home’s 70 R-value-rated ceilings and triple-pane Marvin windows kicks out enough heat to require the home’s furnace to operate only occasionally each winter day. The Morsoe 7642 wood burning stove is made in Denmark and was carefully selected and specified by the homeowners. It is the metaphoric beating heart at the center of their living spaces.

All of those spaces are unified in another way. Their clean, understated yet rich finishes are used in all three main spaces—the kitchen, the great room and the dining room. Maple cabinets and maple trim are found throughout. In addition, the same Calico White quartz from MSI that is used on the kitchen countertops and kitchen island is also used on vanities and the built-in buffet area in the dining room. Overall, there is a sense of very intentional, well-designed spaces where quality over quantity is the ethos.

“If they would have chosen not to do all of the green initiatives, this project would have been a lot less expensive. The triple-pane windows, the spray-foam insulation and the R-70 ceilings and stuff like that costs extra money. Those items put the project at $200 per square foot,” Levin notes. “But from an interior finishes standpoint, there are areas where we are making fairly standard materials look a lot nicer than what people might expect their cost to be.

“It looks a lot higher end than it really is. The cohesiveness of it and the style of it lends itself toward that high-design feeling,” he continues. “Maple is a very easily purchased and used material. We used the same Caesarstone countertop everywhere. We got everything out of the slabs that we purchased. For flooring, we used a Marmoleum that goes through the mudroom, the dining room and the kitchen. And then we used maple flooring throughout the rest of the main level. The only real differences appear in the use of tile for the backsplash and the tile surrounding the wood-burning stove,” he adds.

As Levin explains, this project seems to fit perfectly with the kind of work they intended to do when the company was formed in 2008. Revolution is a true design/build firm where design and project management reside with only one or two individuals. Their process is very iterative and precise, and there tends to be a very clear line of communication that allows for more accurate and consistent changes when they occur. And when everyone is on the same page, it allows time for purchases like unique Italian tiles that require eight- to 10-week ordering lead times, which was the case for the tile used in the kitchen backsplash.

Almost no traces of the original 1969 rambler exist on the exterior of the home. From a massing standpoint, a portion of it is has two floors versus its previous single-floor form. And the cladding is very contemporary and up-to-date. From a distance, the cedar planks look as if they have been singed in the Japanese style called Shou Sugi Ban, but they are not. Instead, they have been stained black. Other portions of the exterior are comprised of vertical, natural tongue-and-grooved cedar. The goal, Levin says, was to bring balance to the massing and to avoid having it appear as one monolithic façade.

Another key element of the façade is the trellis, which bisects the two-story portion of the elevation horizontally and stretches out past the front door. From the street it reads like a porch, but the slats are open, allowing light through to the first-floor windows and into the dining room and foyer. Light and dark wood is also at work in the trellis. And the contrast creates an interesting variability.

There are no sidewalks in the neighborhood, so the front walk runs from the driveway across to the front entry. The entry is the only covered portion of the trellis. It is marked by two very solid-looking columns made of horizontal natural cedar planks. Inside are load-bearing columns to support the slightly cantilevered bedrooms above.

Scraped and reconceived, the resulting home is efficient, contemporary and utterly transformed. It is an understated “revolution” in remodeling. QR