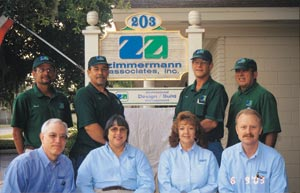 Sunny Zimmermann worked hard for many years to launch a local chapter of the NAHB’s Remodelors Council in Polk County, Fla. He felt that he and his company, Zimmermann Associates of Lakeland, Fla., could benefit through the education and networking the local affiliate would offer. It was difficult to convince other local industry professionals how sharing experiences and raising professionalism could help them be more profitable in their businesses.

“It’s easier if you can get people to come to a few meetings, relate to one another and see what kind of benefit there is,” says Zimmermann. “Until you find out how remarkable other people are doing, you may not realize you’re not set up to do as well as you could.”

Zimmermann Associates also pioneered a Remodeling Parade of Homes, another program they labored over for a number of years. Having heard of an example of a successful Parade of Homes in northern Florida, Zimmermann could see the incredible value of being able to show off actual work, not just before and after photos. But from a practical standpoint, he could also see the difficulty in implementing such a program.

“Through the years I have, with enormous trepidation, tried to get our customers enthusiastic about showing off their successes,” Zimmermann says. “It’s not like new homes. People are living there.”

However, the company completed one landmark project for a client who was willing to stay in a hotel while the open house took place. Zimmermann Associates brought in a cleaning crew, set up velvet ropes and blew up a nice before shot to stand on an easel.

Over the course of two days, Zimmermann Associates attracted 1,000 visitors to the home, an enormous success. “Even now, a year later, I still have people coming up and saying, ‘It was a great presentation,’ ” Zimmermann says.

Sponsored by the local builders association, Zimmermann now looks to make the Remodeling Parade of Homes an annual event. “We hope that based on our success, other remodelers will be inclined to join in,” he says.

Much like a model home, this program allows participants to showcase their capabilities and to generate leads. Potential clients have the opportunity to see what they can do, and it may give them optimism that their project can be completed as well.